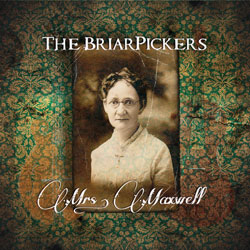 Mrs. Maxwell is the debut album from The BriarPickers and like the band itself, it is a direct consequence of two previous records: Jim Wood and John Hartford's, The Bullies Have All Gone To Rest, and Bob Carlin and John Hartford's, The Fun of Open Discussion. Like the records that inspired it, Mrs. Maxwell is the work of two musicians, recorded live in the artist's home.

The BriarPickers are Brian Ray on mandolin and Paul Kienitz on fiddle. The two have been playing together in various band formations, including This is the Squirrel Hunters and Blue Grass Boys Reunion, to name a few. Fascinated by the challenge and freedom of a mandolin/fiddle duet, and encouraged and inspired from the aforementioned duet records, The BriarPickers were born.

We were looking for a name for the band and going through old-time tunes (as one does for a band name) and this tune was thrown into the hat. Paul had first heard it from Cathy Fink and I knew it from Buddy Thomas. It was a good fit and a moniker was born. Luckily, it's also a great tune that we play often.

This is one of the many songs we've blindly stolen from the Jim Wood and John Hartford record, The Bullies Have All Gone To Rest. Most folks play it with a third part... which we've tried to incorporate... but something just won't let us do it. Our version remains true to Jim and John's... which is how we like it.

This is an extremely obscure tune from Bill Monroe. I first heard it on the Bill Monroe instructional DVD and then again from Mike Compton... who, as he is inclined to do, would tell us we're playing it wrong.

This is a tune written by Lynn "Chirps" Smith... and probably our most played tune. It's the swiss army knife of tunes! It is an equally appropriate tune for a wedding or mosh pit. It makes excuses for unwanted lipstick on your collar! 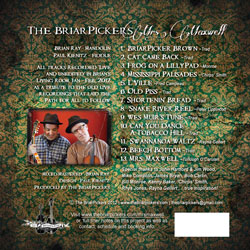 This is a tune from Fred Campeau that we stole off Chirps... The Midwest is teeming with good fiddlers who write good tunes... this is a fine example of both. This one also finds it's way into most of our sets...

We blatantly stole this from Mike Compton and David Grier and before they had a chance to record it themselves. Still, when asked... (and nobody will) I'm gonna say they stole it from us. It's one of the most beautiful songs you'll ever hear... but has an almost comically ill-fitting name. We play this at weddings a lot... but call it "Old P" if asked about it's name. It's one of the many treasures to be found in the Samuel Bayard book.

The theft of this tune (aka The Folk Process) probably began from another of our band-defining records, The Fun of Open Discussion, by John Hartford and Bob Carlin, and also took a page from Rhys Jones' version... but it truly manifested itself from James Bryan's version off of his difficult to obtain album, Lookout Blues. His version includes what is known in the band as the "scoop" and still gets a chuckle from both of us every time we play it for it's sheer greatness. This tune took many takes and this particular take was a bit spritely out of determination. Admittedly faster than the tune should be played but we'll stand by it all the same.

Another tune we stole from Chirps who seems to have an endless supply. This one was penned by Peter Lippincott.

Youtube has become an excellent resource for tunes and this is a prime example. I heard James Bryan and Carl Jones playing this tune on YouTube and before it was over I grabbed my mando and started learning it. I had to email the link to Chirps to find out what the tune was called.

10. Can You Dance a Tobacco Hill

Paul stole this off of Brad Leftwich. I had to actually email Brad to find out what the heck he was singing! Even still, I managed to mangle the words (sorry Brad). This was a one-off take on the first night of recording and before we had proper levels set. We liked the energy from this take though, so it made the cut.

This one of prettier waltz you'll hear and one of our favorites. We're not sure if the titles eludes to the so named river or the 'Gathering' or her home town or just a state of mind, but we try to play it like a lazy river. Written by Rayna Gellert who is a constant influence.

Another tune from the Jim Wood and John Hartford record, and a one that helped define us as a duet.

This is another great tune off Hartford and Carlin's The Fun of Open Discussion, and continues to be a band favorite. It was written by Turlough O'Carolan, an Irish harper known for his great melodies.